In this tutorial you will learn about the ReactJS Refs and its application with practical example.

In React, refs are similar to keys and can be added to an element as a attribute. Setting a refs to an element returns a reference to the actual element. The refs attribute is used to access and manipulate the DOM elements such as managing focus, text selection, or reset value etc. The refs can be used as in callbacks. However, overuse of the refs should be avoided.

In React, a refs is created using React.createRef() function and then can be assigned to a React elements using the ref attribute.

In React, when a ref is assigned to HTML element inside render method, a reference to the node is accessible via current attribute of the ref.

The refs behave differently as per the type of the element it is with. When a ref is assigned to HTML element inside render method, the ref object created in the constructor returns the underlying DOM element as its current property. While, when the ref attribute used with a custom class component, the ref object returns the current instance of the component as its current property.

Note:- The ref attribute can not be used with functional components as they don’t have instances. 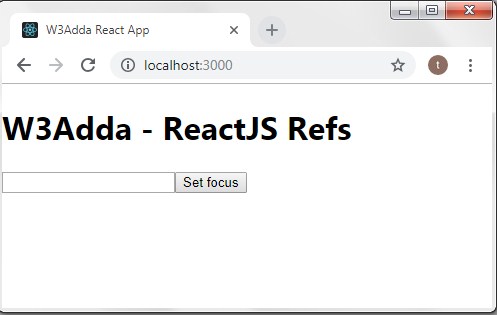 In this tutorial we have learn about the ReactJS Refs and its application with practical example. I hope you will like this tutorial.
Copyright © 2022 W3Adda. All Rights Reserved.