In this tutorial you will learn about the C for Loop and its application with practical example.

The flowchart image illustrates the working of for loop statement: 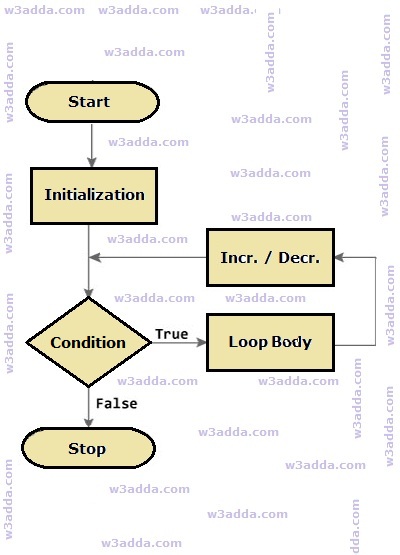 The general for loop syntax in c programming is as follows:

Above is the general syntax of a for loop. We just initialize iterator, check condition and then increment or decrement iterator value. The for loop has three components separated by semicolons.

initialization :- In this section is used to declare and initialize the loop iterator. This is the first statement to be executed and executed only once at the beginning.

condition :- Next, the test condition is evaluated before every iteration, and if it returns a true value then the loop body is executed for current iteration. If it returns a false value then loop is terminated. Then control jumps to the next statement just after the for loop.

How for Loop Works In C

Why We Need For Loop?

For Loop Example In c

Below is the simple for loop example to demonstrate the use of for loop in c programming:

Here, we have initialized ctr with initial value of 1, in the next we checks the condition ctr <= 5 for each of the iteration. If the test condition returns True, the statements inside loop body are executed and if test condition returns False then the for loop is terminated. In incr/decr section we have incremented the ctr value by one for each if the iteration. When we run the above C program, we see the following output –

Various Forms of for loop In C

for loop without initialization

for loop without increment or decrement

for loop without initialization and without increment

In this for loop form, the loop variable can be initialized before the loop and can be increment or decremented inside the loop.

Multiple Initialization In for Loop

It is also possible to initialize multiple variables in for loop.

Multiple test conditions can be joined with logical AND (&&) and/or OR (||) operators. It has two variables in increment part. Should be separated by comma.

In this tutorial we have learn about the C for Loop and its application with practical example. I hope you will like this tutorial.
Copyright © 2022 W3Adda. All Rights Reserved.