In this tutorial you will learn about the Create Simple Calculator Program In Java and its application with practical example.

In this tutorial, we will learn to create a Java program to make a simple Calculator using Switch case using Java programming.

Calculator is a Device that is used to performing mathematical operation like arithmetic operations on numbers.With the Calculators we can perform operation like Addition, Subtraction,Multiplication, and Division… and function like that.

In this our program we will create a small calculator using switch case . We would first declared and initialized the required variables. Next, we would prompt user to input the two values . Later in program we will ask operator and perform that particular operation in our program.

After declaring variables  in the next statement user will be prompted to enter two values and  which will be assigned to variable ‘a‘ and ‘b‘ respectively as shown in image below. 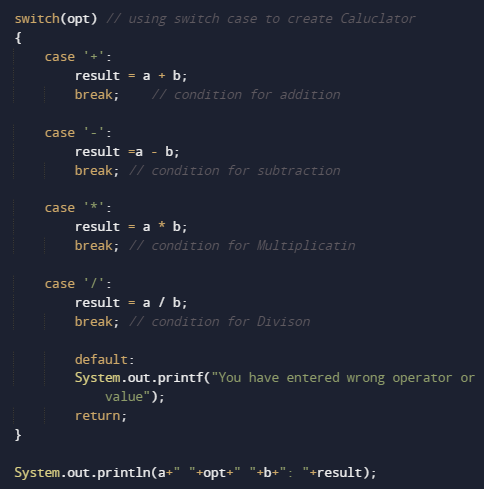 The above  statements compute the addition of two numbers and print the output.

and finally we will print the result.

In this tutorial we have learn about the Create Simple Calculator Program In Java and its application with practical example. I hope you will like this tutorial.
Copyright © 2021 W3Schools | W3Adda. All Rights Reserved.