In this tutorial you will learn about the Program to check Strong Number In Java and its application with practical example.

In this tutorial, we will learn to create a Java Program to check Strong Numbers in Java using Java programming.

In our program we will find given number is a strong number or not in java programming. We would first declared and initialized the required variables. Next, we would prompt user to input the age value .Later we calculate the age is valid for vote or not let’s have a look at the code.

Not a strong number.

And after that we calculate the value given number is strong or not by passing the number to user define function Strong(number) . 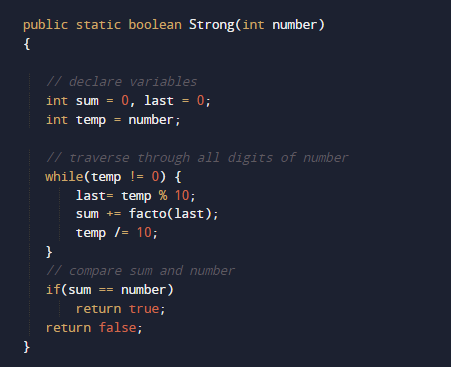 within the function here first of all we are going to find factors of given number and also the factorial of each factor of a number.

If both are same number is strong

If not Not a strong number

In this tutorial we have learn about the Program to check Strong Number In Java and its application with practical example. I hope you will like this tutorial.
Copyright © 2022 W3Adda. All Rights Reserved.