In this tutorial you will learn about the Program to check Kaprekar Number In Java and its application with practical example.

In this tutorial, we will learn to create a Java Program to check Kaprekar Numbers in Java using Java programming.

What is Kaprekar Number.

Capricorn or Kaprekar number is a number whose square is divided into two parts  and add the additions of parts is equal to the number.

Not a Kaprekar Number.

after getting a value from user we will pass the number to function if(Kaprekar(no)) where we will check condition for Kaprekar number that given number is Kaprekar  number or not. 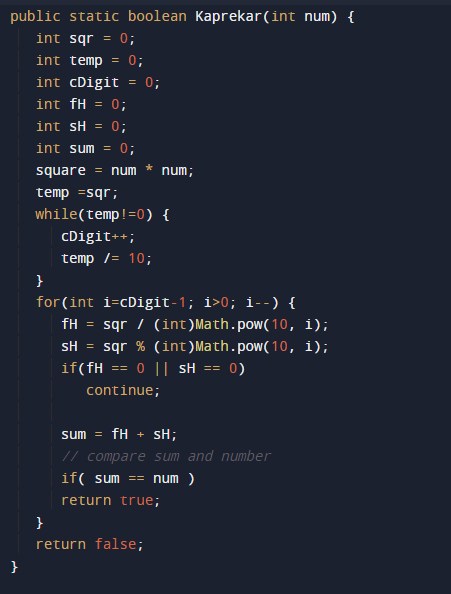 Procedure that check the given number is kaprekar number or not.

1) Take a number from user.
2) Find the square of a number.
3) Count all the digit of a squared number.
4) Iterator variable i start from digits of square – 1.
5) Ge first half, by dividing the square value by 10.
6) And second part as remainder value after dividing 10.
7) Check value of half’s if any part having only 0, if found skip the iteration if not.
8) Calculate sum of hF+sH.
9) Comparing sum and number, 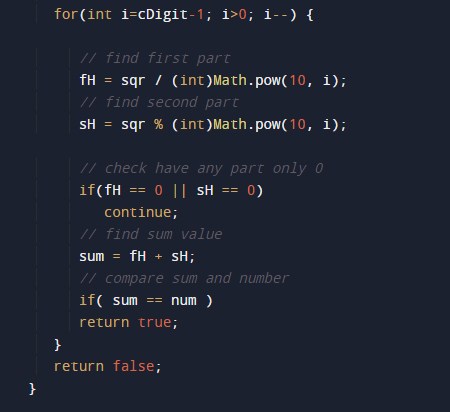 and finally we will print number is Kaprekar or not.

In this tutorial we have learn about the Program to check Kaprekar Number In Java and its application with practical example. I hope you will like this tutorial.
Copyright © 2022 W3Adda. All Rights Reserved.