In this tutorial you will learn about the ReactJS Components and its application with practical example.

Components are the basic building blocks of any ReactJS application. React Components are simply independent, reusable code block which usually contains HTML/Javascript code. This way you can split the application UI into independent reusable components/module. Component’s data is saved in its state, this state can be changed based upon the user action. As the component’s state changes the ReactJS re-renders the component on browser.

A ReactJS component can be one of following two types –

There are several ways you can create a components in React.

A functional component represents the simplest form of a ReactJS component. It can be easily defined by just writing a JavaScript function as following –

The above Javascript function represents a valid React component, because it receives a single object of properties (props) as function argument and returns DOM Element in special HTML like syntax called JSX.

Here, we have called ReactDOM.render() method with the <Hello name=”W3Adda” /> element, it tells React to call the Hello component with {name: “W3Adda”} as its props. Our Hello component returns a <h1>Hello W3Adda!</h1> element as the result which will be appended to document.getElementById(‘hello-world-wrapper’) . Both the above code block represents the same result.

Step 2:- Now, delete the existing code and put the following code in it and save it-

Inside of “Hello” class we have created a render method which is a part of React.Component class, it return a message enclosed in <h1></h1> tag.

here, we are calling ReactDOM.render method, it takes first argument as the component we want to render, and the second is the DOM element where the component is to be mounted. Here, we are mounting our “Hello” to a DOM Element that we have available in src/index.html file –

Step 3:- Let’s open the terminal again, change directory to your project folder and type the following command in order to run the server.

Step 4:- Now open the following URL in browser to view the output

Step 5:- You will see the following screen. 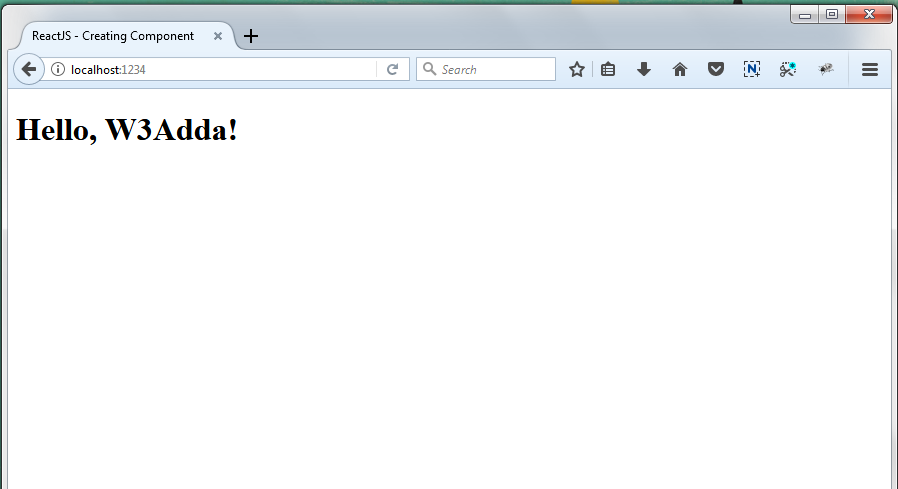 In this tutorial we have learn about the ReactJS Components and its application with practical example. I hope you will like this tutorial.
Copyright © 2022 W3Adda. All Rights Reserved.