In this tutorial you will learn about the ReactJS Events and its application with practical example.

An event is an action that occurs as a result of the user action or system generated event, such as clicking mouse, pressing a key, loading of webpage, or file being created or modified etc. An event handler is a callback function which is invoked when specified event occurs. An event handler allows programmers to control the execution of the program when specified event occurs. In React, event handling is same as handling events on DOM elements, but there are following syntactic differences –

This is a simple example where we will only use one component. We are just adding onClick event that will trigger handleClick function when button is clicked, it will toggle the isToggle flag. 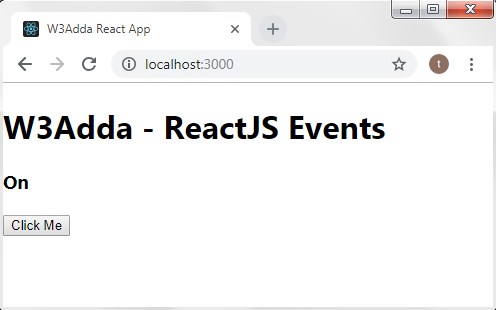 In this tutorial we have learn about the ReactJS Events and its application with practical example. I hope you will like this tutorial.
Copyright © 2022 W3Adda. All Rights Reserved.