In this tutorial you will learn about the C Program to check character is a digit or not using IsDigit function and its application with practical example.

In this tutorial, we will learn to create a C program that will Check the Character is Alphabet Digit or Special Character in C programming.

Before starting with this tutorial, we assume that you are the best aware of the following C programming topics:

What is a character?

The character is a single entity in the English language or in any word. These characters can be anything alphabets, digits, special symbols,

In the word “[email protected]”, there are six characters, they are as follows

“@” is a Special Character.

First, we will take the input character from the user. Then will pass that character in the conditional statements to find whether the character is the digit or not without using the isdigit function.

With the help of this program, we can Check the Character with the conditions.

Input character from the user.

Checking the given character is digit or not. 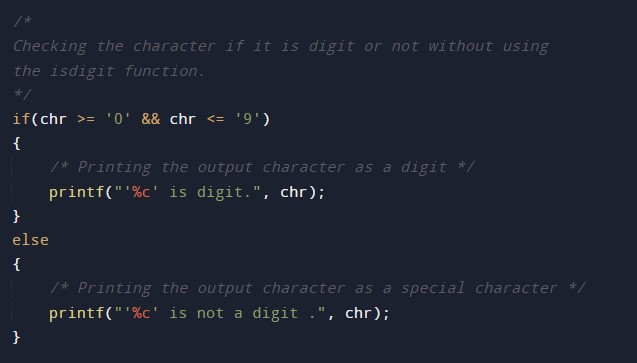 Printing output for the program.

In this tutorial we have learn about the C Program to check character is a digit or not using IsDigit function and its application with practical example. I hope you will like this tutorial.
Copyright © 2022 W3Adda. All Rights Reserved.