In this tutorial you will learn about the Java Program to find Largest of three numbers and its application with practical example.

In this tutorial, we will learn to create Java Program to find Largest of three numbers using Java programming.

It consists a condition, followed by statement if condition true statement executed if not statement will not executed.

Test the condition. If condition true execute statement otherwise jump to else block and executed the statement.

After that we take three numbers from user and find greatest among three using logical operator.

After taking values from users we use logical operator and nested if else statement to calculate largest among three.

Then, we will find the greatest among  using if else statement. 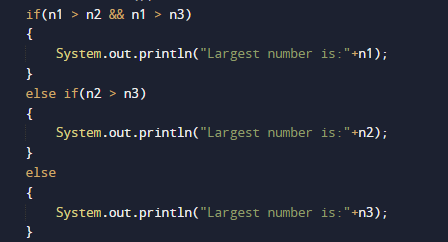 And finally we print the result as shown in the image below.

In this tutorial we have learn about the Java Program to find Largest of three numbers and its application with practical example. I hope you will like this tutorial.
Copyright © 2022 W3Adda. All Rights Reserved.