In this tutorial you will learn about the Buzz Fizz Program in C and its application with practical example.

In this tutorial, we will learn to create a C program that  Find BUZZ FIZZ  using C programming.

What Is Buzz Fizz? 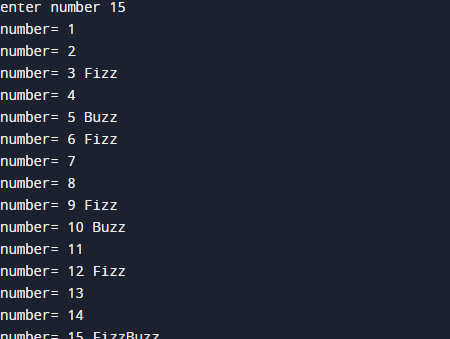 Here in this program we will print  number from 1 to no.If number is  multiple of 3, we print “Fizz” instead of the number. as you can see in image below.

And if number is multiple of 5, print “Buzz” instead of the number.

And in final case if numbers which are multiples of both 3 and 5, print “FizzBuzz” instead of the number.So in our program we take a number from user at run time,suppose user gives a number 15 then the series of fizz , buzz  and fizzbuzz is look like this.

In this tutorial we have learn about the Buzz Fizz Program in C and its application with practical example. I hope you will like this tutorial.
Copyright © 2021 W3Schools | W3Adda. All Rights Reserved.