In this tutorial you will learn about the Odd Number Series Program in Java and its application with practical example.

In this tutorial, we will learn to create a Java program that will Print Odd Number Series using Java programming.

Before starting with this tutorial, we assume that you are the best aware of the following Java programming topics:

What is an Odd number?

A number is said to be an Odd number when that number is divided by two into two equal whole numbers. And there should be a remainder of zero when it is being divided by 2.

Program to Print Odd Numbers from 1 to N.

With the help of this program, we can print a series of Odd numbers up to N number.

Input message for the user to take an endpoint of the series.

Program Logic Code to generate the series of odd numbers. 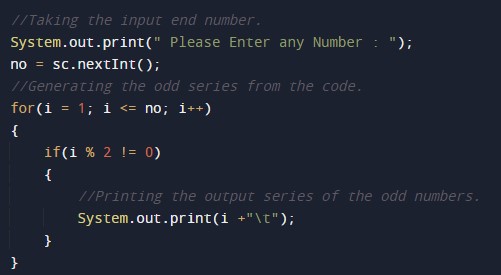 In this tutorial we have learn about the Odd Number Series Program in Java and its application with practical example. I hope you will like this tutorial.
Copyright © 2022 W3Adda. All Rights Reserved.