In this tutorial you will learn about the Java Program to Print Invert Triangle and its application with practical example.

In this tutorial, we will learn to create a Java program that will Print Inverted Triangle using Java programming Language.

To print Inverted Triangle Star patterns in Java , we will use nested for loops. The outermost loop is responsible for the number of rows in star (*) of Inverted Triangle,whereas inner one  loop will print the required number of stars * in each row.

Now we going  to run loops

Outermost loop to iterate through a number of rows as initialize . Now, 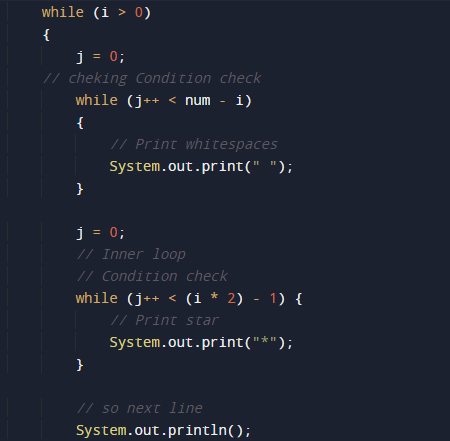 In this tutorial we have learn about the Java Program to Print Invert Triangle and its application with practical example. I hope you will like this tutorial.
Copyright © 2022 W3Adda. All Rights Reserved.