In this tutorial you will learn about the Python Program to Display Calendar and its application with practical example.

In this tutorial, we will learn to create a Python Program to Display Calendar using python Programming.

Before starting with this tutorial we assume that you are best aware of the following Python programming topics:

As you can see we have taken value of year in ‘yy’ format and month in ‘mm’ format in display the inputted year and month using in-built calendar.month() Method .

And in the next statement user will be prompted to enter two values of “Year”  and “Month” and assigned them to variables ‘yy‘ and ‘mm’ respectively.

In this program above, we import the module called “Calendar”.

In which built-in method “month() ” inside this module we take the value of  year and the month as an arguments (Parameter) and displays the calendar for that month and that year.

In our program we will create a program in which we will Display whole year Calendar .We would first declared and initialized the required variables. Next, we would prompt user to input the values  later we will Display Calendar. 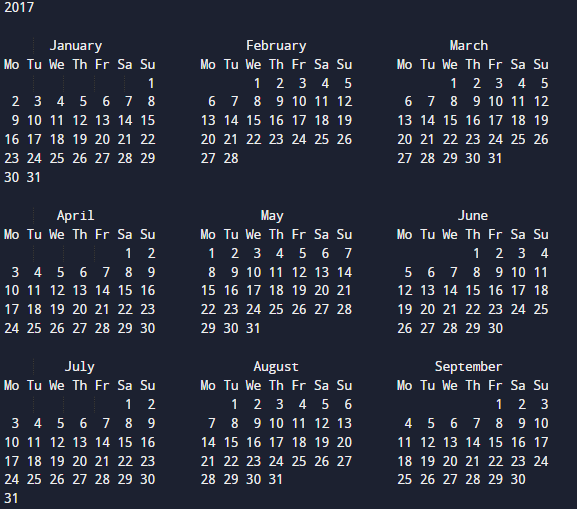 In this program First we import the calendar module. The built-in function calendar () inside the module takes in the year and displays the whole year calendar for that year.

In this tutorial we have learn about the Python Program to Display Calendar and its application with practical example. I hope you will like this tutorial.
Copyright © 2022 W3Adda. All Rights Reserved.